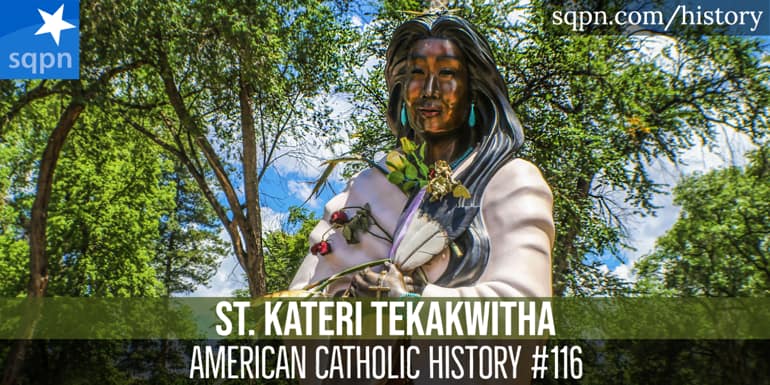 St. Kateri Tekakwitha lived a life marked by tragedy and upheaval, but also a lot of grace and love. She was born to Mohawk Indian parents (though her mother was originally Algonquin), who both died from smallpox when she was four. She survived smallpox, but the disease left her face scarred and her eyesight damaged. Because of this handicap she was called, “She who bumps into things,” or in Mohawk, “Tekakwitha.” At a young age she pledged to remain a virgin and not get married, which was a very strange and unheard of thing among Mohawk women. After exposure to Catholic missionaries she became Catholic and was baptized with the Mohawk form of the name “Catherine,” which is “Kateri.” Due to the intense ridicule she suffered for her conversion she left her village and moved to Kahnawake, a village for Native Americans who had become Catholic. Surrounded by fellow Catholics and with a few particular friends who helped her to go deeper into her faith she became even more devout. She died at just 24 years old due in part to lingering health issues from her childhood bout with smallpox.