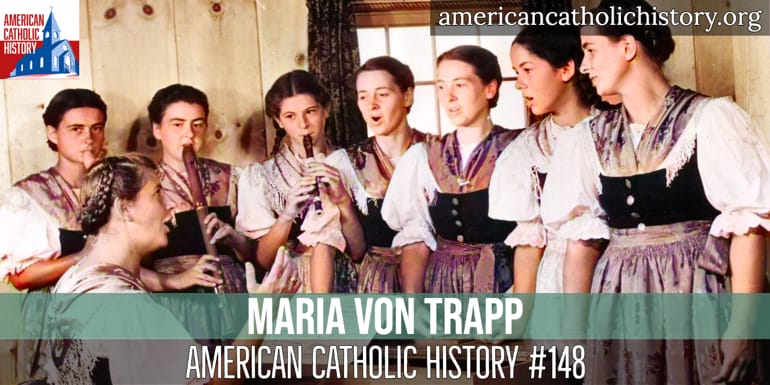 Maria von Trapp wrote the family autobiography that became the The Sound of Music on Broadway in 1959 and in Hollywood in 1965. She was the stepmother to Captian Georg von Trapp’s seven original children, while she and the Captain also had three of their own. But before she was ready to be a wife and a mother, she had to overcome a difficult childhood. Born in 1905, she was an orphan by nine years old. She was raised by an abusive relative who instilled his atheism and antipathy toward Catholicism in her. After accidentally going to Mass — she thought it was just a Bach concert — she was drawn to Catholicism. She graduated from teacher college and entered the Nonnberg Abbey in Salzburg, one of the most rigorous in Austria. After two years she was assigned to be a tutor to the third child of the widowed Captain von Trapp, and the rest is history. The couple and their family did face persecution from the Nazis, they did flee Austria for the United States, and they did win the Salzburg Music Festival, but that’s about where the similarities with the movie end. They settled in Stowe, Vermont, continued touring, and opened a lodge to visitors. Today, the Trapp Family Lodge remains in operation, welcoming visitors for European-style amenities and four-season relaxation and activity.