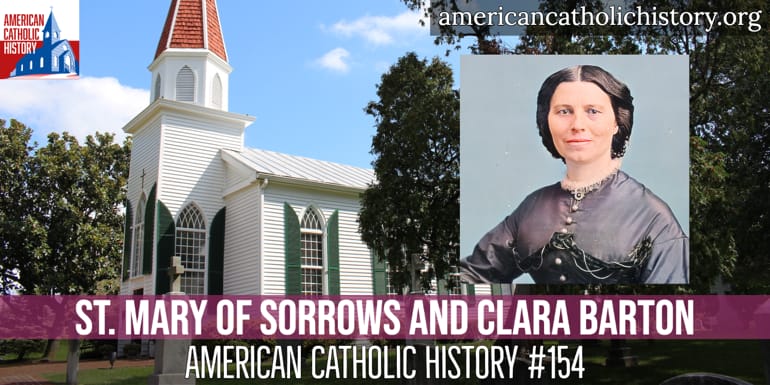 In 1862, Clara Barton got some of the experience which would lead to her founding the Red Cross. That year, St. Mary of Sorrows Church in Fairfax Station, Virginia, became a field hospital during the Second Battle of Bull Run — or Second Manassas, if you’re from the South. The church was only about a year old. The pews were pulled out to be used for beds around the grounds as thousands of wounded and dying were brought to the church grounds, which were only about one quarter mile from the new railroad depot for Fairfax. During the battle, Clara Barton came out to held nurse the wounded. She served admirably, and remained at the work until the last wounded soldier was loaded on a train bound for a hospital in Alexandria or Washington, DC. After the war, all but one of the many dead who were buried in the Church grounds were exhumed and relocated to Arlington National Cemetery. In the 1870s, President Ulysses S. Grant ordered that new pews be provided for St. Mary, as the one original ones had been destroyed during their usage as hospital beds and firewood.